Muddy language and the rise of postmodernism

The advent of postmodernism as the prevailing academic theory is of great significance, not only within academia but for feminist as well as progressive social movements. There are several problems with postmodernism, the first of which has to do with the way it has coopted some of the key insights of radical feminism, but stripped them of their political impact. —Karla Mantilla (1999) 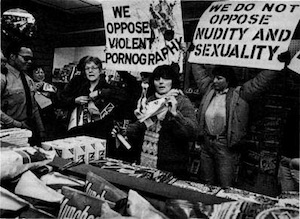 My first point of critique is the way we speak and discuss with one another. This is, as many other things, not something that we are born with, something that “just is”, it is a social construction like the rest of our social world. Today, the mainstream – hegemonic – idea is that we “all need to get along” and we need to reach a consensus, the middle road, for the good of all. This is an enormous distortion of reality that obscures something profound : there are groups in this world with fundamentally, objectively, opposing interests, e.g. the class of capitalists versus “the working class”, i.e. everyone else ; the group of pimps and traffickers versus all women, and so on. The inability to see this or speak about this means that we cannot talk about ways to change the situation.

Furthermore the rise of postmodernism has as its effect – perhaps unintended but nevertheless real – the silencing of women’s voices and the continuation of sexism. Presented as an improvement, postmodernism makes it nearly impossible to say things clearly, to take an effective stand, in short, to say anything real that could be useful to change the world. It fits perfectly with the current political climate ; postmodernist feminism is acceptable because it does not in a radical way challenge the institutions of oppression with an anti-systemic mass movement. Instead it individualizes and depoliticizes, all the while pretending to be the best form of discourse, feminism for the next generation.

In postmodern feminist circles, the goal of feminism is largely forgotten. As in other social movements, some of the form of the movement is still visible but the actual contents, the visions of a better future and the strategy to reach it, have disappeared. All dissolves into idle discourse... As a result, social movements are redirected to individual – liberal – struggle : saving the environment by buying organic products, ending sexism by “deconstructing your gender” and so on… It is remarkable how similar this process is in many social movements. For example, recent attempts to organise a radical ecological movement have brought the same process to light, with problematic consensus discourse and depoliticized individual resistance (Kenis, 2009).

Over the last few decades, pornography and prostitution have become more and more socially acceptable, more ’mainstreamed’. We are generally told that this process is a positive sign of the liberalization of society, a movement away from restrictive social norms associated with the Fifties and earlier decades. The acceptability of pornography and pimping is tied closely in the public mind with tolerance for lesbians and gays, improved sex education, improved access to birth control technologies, etc. We are told it is a package deal. —D. A. Clarke (2004)

Pornography has steadily become more mainstream. Prostitution and pornography are everywhere, at least the romanticized versions of it. The abuse and violence in those massive worldwide industries is covered up. Movies, books, all mainstream culture presents pornography as harmless entertainment, as a legitimate business against which only old-fashioned feminists still fight against.

The effect – once again probably not intended – of this process is that feminists do things that align with patriarchal demands, but this time it’s supposedly ok because we’re feminists and we “freely choose to do it” as an act of liberation [1]. And also, can we please not think about the hundreds of thousands of women who are forced against their will, trafficked, prostituted and filmed ? It makes me an unhappy not-fun kind of feminist.

In short, the process of pornification alters our view on reality. Slowly, everyone is moving along the line of acceptance of violence against women – of which pornography is the visual expression – and no one can understand the need to resist this. It is the same with sexism in general : so many problems women face every day are no longer connected to a structural analysis, it becomes an individual problem of individual women, a “problem that has no name” to coin a phrase from Betty Friedan [2].

Capitalism and the co-optation of feminism

Nancy Fraser has presented an interesting and confrontational view in which the relation between capitalism and the feminist movement as a whole is analysed. In short, during the second wave an important shift happened in the form of capitalism, from “state-capitalism” to the current form of neoliberalism. During this process of change, capitalism has adapted to the resistance against it.

Feminism itself is split apart into disparate strands, some of these resisted, while others are woven into the fabric of capitalism and actually help to maintain this system. Liberal feminism has thrived and is now the dominant form of feminism.

The neoliberal paradigm of freedom is used against mass movements and critical group analyses. Suddenly, feminists who critique certain practices – be it marriage, career feminism or pornification – are accused of censorship and limiting other women’s freedom.

Another important aspect of this problem is not just that some women make careers and others do not, but that by this very process, the idea of women’s liberation becomes less clear. Women can already be bankers, so what is there to fight against ? Surely, this means gender justice must already be achieved [4].

"The fate of every individual woman—no matter what her politics, character, values, qualities—is tied to the fate of all women whether she likes it or not." —Andrea Dworkin (1983)

All of the above elements have a common ingredient : the very idea of organized group resistance is made difficult to speak about, and the word feminism itself becomes linked to individualistic improvements, the liberal empowerment discourse.

The idea that the goal of feminism is not to have individual women make careers, but to liberate women as a group, becomes invisible and unthinkable.

The goal of real feminism, on the other hand, is actually quite simple. So simple in fact, that it takes an enormous amount of tricks and muddy discourse to cover it up. So, back to basics : feminism is the resistance movement against patriarchy. Feminism, defined narrowly as e.g. by bell hooks, is the struggle to end sexist oppression. Defined broadly, feminists want to end all forms of oppression and domination and transform the world, create a different society : one without oppression, without violence, rape or war ; a society based on feminist values and morals.

In the light of the ongoing oppression that women experience, and the violence done against us every day on a scale that is simply unbelievable, feminism is an extremely important movement. We must try to have a clear strategic focus and not lose sight of our goals. Anti-feminist ideas like liberal individualistic improvements for the few, or naturalistic explanations of oppression [5], must be resisted. Feminism is the only movement today which focuses on resistance against (sexist) oppression and the transforming of the world into a place free of violence and domination.

The only way for feminism to actually reach any important goals is to commit to a radical and left political vision.

The philosophers have only interpreted the world, in various ways ; the point is to change it. —Karl Marx, Theses on Feuerbach (Thesis XI), 1845

[2] As an aside, Marilyn Frye critiques several assumptions of Friedans book, The Feminine Mystique, in her essay in The Politics of Reality (Frye, 1983)

[3] My summary is too brief and does not do justice to Fraser’s nuanced analysis.

[5] The latest fashion in this theme is called Darwinist feminism, based on currently popular evolutionary psychology