I did not know that I was going to have a child, and even less that I would be a lesbian mother. I was not sure that I wanted to be a parent. Butâ€¦I knew that if I was going to be one, I was going to be a feminist one. Different elements of life, and a great deal of luck (I think now) has meant that I ended up being a parent two years ago, helped by technology, public Belgian hospital(ity) and social security system, and an anonymous sperm donor.

I think today that my hesitation about parenthood had actually a lot to do with not wanting to be pressed into the big patriarchal notions and realities of ‘Family’ and ‘Motherhood’. It seemed impossible to escape being ‘trapped’ emotionally, ideologically, and practically if one had children within that mamapapa- child(-house-dog) framework. I know that some manage, but I had a hard time feeling that for myself. 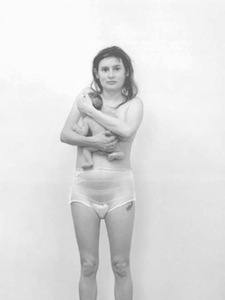 Luckily enough I turned lesbian, and it opened new spaces to me in so many ways I cannot list them here. Suddenly something that had just been a nonexistent desire, a non-issue, became present in my thoughts and feelings. Did I want to be a parent in my life, to care for a child ? The answer we took together with my love, was yes. So here we are now, with a fantastic two-year old night-terrorist-mostbeautiful- being-in-the-world !

What struck me was the range of reactions that I got. I purposefully say “I”, because I do think that the reactions my lover as a future non-biological mother got were both similar at times, but sometimes very different.

There were some, although few, openly homophobic reactions – as I have heard before, that homos just should not reproduce, or have children. This was very rare though, and no one expressed reactions like this once it was clear that I was actually pregnant. Then there were some that I would call covert or latent homophobic reactions. Non-spoken judgements about how we had ‘made’ him, that he had no ‘father’, not even a known donor, which apparently is higher on the hierarchical scale of how to make babies.

And of course, once it was clear that our baby was a boy, came comments like : will there be men in his life ; do you often see men… ? Some seemed to be shocked that we choose five earth mothers and one wannabe hybrid (he does not want to be called the French ‘parrain’ and has chosen ‘marrain’ instead) for our son. There was also a lot of straightforward curiosity. I don’t have a problem with this, and I really don’t mind explaining and sharing how fantastic it was to ‘make’ our baby. As long as the questions are not malevolent, and insinuating judgement rather than curiosity.

But I must say that the absolutely most common reactions that I got were very positive – both from lesbian, gay, and hetero friends. Some heteros almost reacted as if they were a bit ‘relieved’, along the lines of ‘ouff, she/ they are just like us’ . Who knows what lesbians actually do, what their lives are like, their trajectories are unpredictable and difficult to relate to. But suddenly they announce that they are gong to be mothers, parents, and as it is a very common hetero life trajectory it creates more possibilities for recognition. And so in some ways, it seems to brings ‘us’ closer to ‘them’. This raises quite contradictory reactions in me. On the one hand, it is a good thing if it means less homophobia and estrangeness in front of me and other homos (parents or not). But on the other hand, I sometimes feel that I am being squeezed into a model that anyway is not mine, nor do I need or want it to be. Maybe I will have to live and deal with these contradictions every day. As I will have to deal with the constant questions and contradictions of how to make our son grow up strong and positive in his difference, while at the same time make him feel that he belongs – in a context with a different majority setting.

I am very confident actually, maybe because I am so ‘proud’ of us, and maybe this is what will be the most important resource for our little baby, to absorb and integrate that self-respect about how he was ‘made’, how his ‘family’ is made up, and embrace this difference that he has from the start, rather than trying to fit into a narrow model that anyway is not his !