â€˜What a lucky little boy,â€™ people have said to usabout our adopted son Solomon, now 2. They mean it warmly : â€˜any child would be lucky to have you as parents.â€™ Of course, thereâ€™s another implication : that weâ€™ve saved him from an â€˜underprivilegedâ€™ world (African-American/poor) and brought him into ours, full of privilege (white/middle class). When people say this, I am brought up short.

Somehow, they don’t see our luck : Solomon is a most remarkable child, a buddha, a jewel that has magically landed in our midst. Of course they see him as cute, but they don’t see that he is empowered : he, in fact, is saving us. 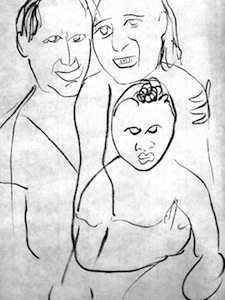 It’s true he¹s lucky. When we first met him at two days old he was 10 weeks premature and we sat in the hospital as he struggled to learn to breathe, eat, grow, amid dire medical predictions of his chances. He seemed not only lucky to receive excellent care, but lucky to be able to integrate it, overcoming crisis after crisis, smiling, yawning, content.

We met his birth mother for one short, intense hour. She was intelligent, mature, a mother of three older children. She was articulate about her choice, requesting a same sex couple because she knew it was harder for us to adopt : we must really want it. We were not saving him from her, she was making a choice. His birth family would have provided obvious advantages for him of heritage, culture, identity, but something different happened—not necessarily better or worse, but different. There is so much chance at work in adoption. Things could easily not have happened as they did.

In fact, we are the lucky ones. This is not euphemism or platitude. At ages 49 and 50, we could easily not have had a child, and our lives would still be full. But as a personality, Solomon meets us halfway and makes the whole thing easy (relatively). This is lucky, given the challenges of starting parenting at the half-century mark. Further evidence of our luck grows. When people remark on his beauty, we don’t demur modestly. He is not our genetic mirror, and we don’t take credit for his beauty, only pleasure. And we feel less encumbered by the ghosts of Oedipus, of Virgin and Child, of the phallic mother-son dyad, that impose themselves on women and children everywhere. It seems lucky to be able to love a child, a male child in particular, with less danger of activating the ideology of the Oedipal struggle, when the triangle involves a tiny child and two women who’ve known and loved each other for thirty years. Having spent decades contemplating the unequal nurturing of boys and girls—decades of self-development, critical feminist and gender study, therapy, contemplative practice—we may nevertheless fall into the trap of cultivating gender privilege in our child at moments, but we are super attuned against reenacting the psychological legacies of our families. Somehow this frees us to love him all the way.

Before we met him, I worried that, as an adopted African-American child of white lesbians, he would have to deal every minute with the social projections of others, of childhood. I don’t worry as much about this, now that I’ve witnessed how open he is, how he connects with people. He’ll be confronted with convention more as he grows, but now he negotiates the world with pleasure, one person at a time. He’s beginning to try to figure out where he fits in the cosmos of family and peers, those with daddies and without. But given the luck and chance involved in adoption, the roles and identities have to be more fluid. Sometimes it seems like he’s just this great guy who we¹re hanging out with. Other times it seems clear that the techniques and conventions of family structure can provide security and functionality. I hope we can sustain this versatility, this sense of chance and choice, this sense that our family exists not as an inevitability, stronghold, institution, family with a capital F, but as an instance of sheer luck, an unlikely configuration, fluid and shifting, finding its way.

Sarah Drury is a media artist who teaches at Temple University and currently lives in Philadelphia. Ana Busto is an artist friend.