Brilliant and fairplay BUT hardly any sponsors in media

Letâ€™s speak about football. If you are interested in an open game, brilliant passes, fair play, an uninterrupted and happening game, I do hope you did not miss the European Football Championship - the womenâ€™s championship that is ! Despite the fact that womenâ€™s football has characteristics that make it just as, or even more, interesting than the endless pushing and shoving ofâ€¦ letâ€™s say the English male league, the players and clubs are struggling to get acknowledgement and creating a sustainable economy for their teams. There is little interest from commercial sponsors, media coverage is limited, and spectators at the arenas are sometimes failing to turn out in numbers.

In Europe. In the US, women’s football is a big sport, apparently almost half of all football players are women, while in France the same figure would be 1-3%. 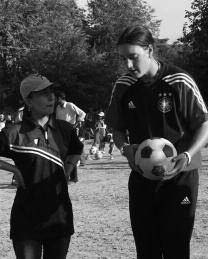 Women practicing sports are always suspect, but some sports are even more suspect than others. It seems as if collective women’s sports are particularly problematic ? At least if they try to compete in sports that by a critical mass of men have been identified as arenas for performing masculinity. Some attempts have been done to try to ‘sell’ women sports, to try to place them into the mainstream sports industry. The most important thing is to get the liking, approval, and support of the sports communications’ industry. And to achieve that, women at elite level have to correspond to the norm of hetero-sexiness. If you are not enough heterofeminine along the lines of dominant norms you risk the disliking of the sport journalists’ club, the sponsors…and the potential spectators. This goes for everyone - for women footballers, tennis players, track athletes. The latter is stunning. As soon as there is a rising track star, she is styled and madeup, nails done, short hair becomes long - a sort of obligatory total make over to please the demands of sponsors.

Fear of not successfully performing ‘femininity’ (and thus being identified as lesbian ?) shapes the careers of many female athletes. And this reagardless of whether they are straight or lesbians. Because of course there are lesbians playing sports (and being bloody good at it !), but since female sports personalities have to play feminine à la mainstream, lesbians most often choose to stay in the closet. Another tabou. Boo. Scary. I guess we have a long way to go until what counts is the game that is played…