The next queer feminist I meet who questions whether the massacre in Gaza, or more general the wars of our age, are feminist or queer â€˜issuesâ€™, I shall kill with my own hands. I really did search for more productive ways of beginning this piece, but hÃ©las. Still too much anger lingering from the war in Palestine, and not enough political places to share the solidarity and organizing work. 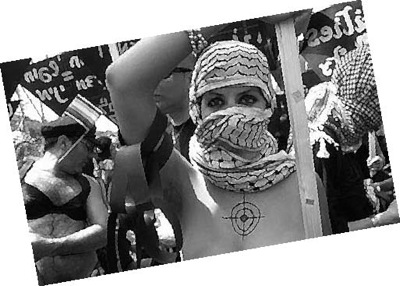 This time I didn’t even bother with one of my usual (feminist and queer) political spaces, the NextGenderation network [1]. In a very first comment on the situation in Gaza, a text by Sara Roy was send around – by all means a mild text, calling for the end of a double standard on the side of Jewish intellectuals. This was immediately followed by a short mail : “Honestly, I cannot understand what this message has to do with gender studies and I object getting mail with playing-down-Hamas’-aggressioncontent via this list.”

The comment remains difficult to digest. The Gaza strip is the largest open-air prison in the world ; it has been argued that the definition of concentration camp applies adequately to it, and more recently the strip is compared to a ghetto, and notably the Warsaw Ghetto with its armed uprising in 1943. The strip is about 41 kilometers long, between 6 and 12 kilometers wide, and houses 1,5 million people. The current blockade (which is not its first) is entering its 20th month. Already in May 2008 a UN report showed that destitution and food insecurity reached an unprecedented critical level in Gaza. What happens when an openair prison gets intensively bombed, day after day, and a part of the feminist and queer movements fails to see a political connection ? The disconnection became visible on the streets. At a first solidarity demonstration in Brussels on December 30th, with more than 10,000 people in the winter cold, the relative absence of white people was striking. When I ran into two inspiring figures of (queer) feminism in Flanders, Ida Dequeecker and Lieve Snellings, they shared the impression and lamented the difficult conversations with, and the absence of, (white) progressive friends. Now honestly… how does it happen that the bombing of an open-air prison filled with starved people becomes ‘too complicated’ to respond to ? [2]

It wasn’t the first time that I felt that resistance against war was not a shared concern (anymore ?) in a queer feminist environment. In the summer of 2006, when Israel bombed Lebanon for 33 days, and some of us did use the NextGenderation mailing list as a space for disseminating news and calls for action, discussions ran high. As queer feminists, it was argued, it was impossible to ‘support’ Hezbollah, as they stood against women’s and gay rights. Never mind that no one on the list was actually rallying for Hezbollah – we only defend the right to (armed) resistance, which is not entirely the same thing, and the difference counts. And never mind that the people of Helem, the most well-known Lebanese LGBT organization based in Beirut, [3] were organizing humanitarian relief and reflected, in words and in deeds, that the war was their issue. (Not surprisingly, as the Israeli bombs on Beirut did not discriminate between straight and gay people…). 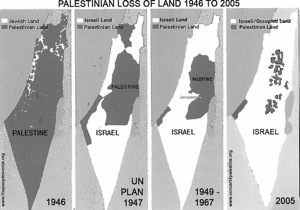 The summer of 2006 was a particular intense conjuncture for LGBT movements within the new geo-political coordinates, which changed so drastically from the Cold War to the ‘War on Terror’ (via the ‘Clash of Civilizations’). It was the summer of World Gay Pride in Jerusalem, against which a minority of LGBT groups organized a boycott No Pride in Occupation [4] It was also the time of the Out Games in Montreal, where a member of Helem was invited to speak at the opening ceremony. Yet the war prevented Rasha Moumneh from flying out of Beirut, and instead she sent a video speech, in which she emphasized that LGBT organizing in Lebanon includes a struggle against an oppressive government, as much as resisting the neo-colonialist agendas that try to co-opt the language human rights to justify their ends. [5]. An appeal was made to the international LGBT community at the Out Games to condemn Israel’s attack on Lebanon, but the community found itself unable to take up the appeal.

Yet another event of that summer is the International Day of Action against Homophobic Persecution (in Iran) – the starting point for Jasbir Puar’s brilliant analysis of how configurations of sexuality, race, gender, nation, class, and ethnicity are realigned in relation to contemporary geo-politics. [6] The action day was initiated by the British OutRage ! and the Parisbased IDAHO, and marked the one-year anniversary of the public hangings in Mashad, Iran, of two Iranian boys. The call for global protest was taken up in more than 20 cities in the world, including Brussels. As the Rainbow House announced its intention to take up the call, I circulated pieces which problematized the action day (including a long mail from the LGBT coordinator at the Human Rights Watch, and information on the explicit Islamofobic agenda of Peter Tatchell at OutRage !, who has no problem in participating in a demonstration of the British racist BNP). The response was defensive and reflected traces of the ‘civilizational’ and neo-colonial impulses which Puar accounts for as ‘homonationalism’.

In relation to the women’s movement and feminism, this dynamic is all but new. Feminism has a longer history of being a ‘handmaiden of colonialism’, of legitimizing civilizing missions, and therefore also a longer history of resisting such bloody complicities. In the new geo-political lay of the land of the ‘War on Terror’ and the ‘Clash of Civilizations’, the rhetoric of women’s emancipation has been used from the outset, and while some feminists are complicit, others resist. In this context, and in particular regarding the debates on the headscarf in Western Europe, NextGenderation developed the ‘Not in our Names !’ campaign. [7] This situation differs for the LGBT movements, who are more recent as a social movement, and cannot rely on a longer history of resisting the interpellation – and perhaps the lure, comfort or privileges ? – of civilizing discourses.

How does one create such alliances ? By not buying into the antagonisms of the new geo-political lay of the land, and this includes questioning prevalent Islamophobia and dislodging notions such as democracy, human rights and secularism from the belligerent and civilizational context in which they are pushed today. By tackling white privileges, and perhaps in particular the ways in which they are caught up in neo-colonial and imperial politics. And by establishing transnational alliances with queer feminists.

I was asked to write about Meem, a wonderful queer feminist group in Beirut. [8] Meem came out of Helem in the way that belongs to a collective history of gay and lesbian organizing – at some point the need for a women’s space, free from patriarchal dynamics, becomes tangible. Yet gender politics are not the only difference : Helem is focused on advocacy, while Meem focuses on support. As a result, Meem attracts a different crowd ; women from different parts of the country, women who are not out. Today Meem has more than 194 members, of which 70 are active. Since almost a year, Meem has an amazing space of its own, the Womyn’s House. Please, do go and read Meem’s website and blog.

I must admit, I don’t find it easy to write about groups like Meem ; as experience has shown that mentioning Arab queer feminists in Western Europe often means working through a whole list of prejudices. Yes, queer feminists exist in the Arab world ; yes, they are organized ; and no, their organizing should not be measured against the (already diverse) trajectories of European LGBT movements (with for example the particular focus on coming out).

Then at some point my interlocutors often say : “How brave these women must be.” Yet this braveness, which for sure is the case, must be well-understood. It is the braveness invoked by that important book All the Women are White, All the Blacks are Male, But Some of US are Brave in which Black feminists in the US, in the early 1980s, underline the fact that social movements and the production of knowledge must stop requiring that people leave a part of their identity and struggle behind in order to fit. [9] This turns the question around : are queer feminists in the West ready and able to question their own positions in order to make transnational alliances possible ? How does the securitization of life for some queers (perhaps increasingly visible by a new centrality of reproductive technologies in queer lives) relate to death and dying for others ?, Puar pointedly asks in this respect. Once more, June Jordan’s words speak to the condition of our political struggles : “Freedom is indivisible, or it is nothing besides sloganeering and short-sighted and short-lived gains for a few.”

[1] The NextGENDERation network is a transnational European network of students, researchers and activists with an interest in feminist theory and politics, and their intersections with anti-racist, migrant, lesbian, queer and anti-capitalist struggles. http://www.nextgenderation.net/

[2] The recent Gaza massacre is of course part of a long and complicated history, which falls beyond the scope of this article, although it is crucial to find time and space to tell that history, and find good ways to tell it, against the paralysis of the feeling ‘it is all so (too) complicated’. For a good, and much acclaimed, documentary on the subject, see Occupation 101. Voices of the Silenced Majority. http://www.occupation101.com/