Heteronormativity in the LGBT communities

LGBTs are sometimes celebrated as the ultimate de-stabilisers of heteropatriarchy, living outside the norms of reproduction of humanity, of norms of how we are supposed to love each other (and not), and outside norms structuring our sexuality and sexual relationships. If only it was trueâ€¦ 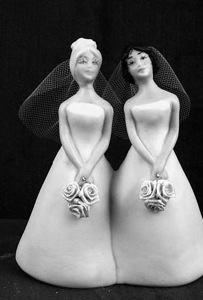 In order to battle daily discrimination, conformity to the dominant behaviours and norms seem to be commanded : monogamy, straight sexuality (although between same-sex partners), lifelong relationships, climbing the professional ladder, being good consumers, etc, etc.

One cannot blame lesbians and gays from wanting to enjoy the same rights as heterosexuals – that is to make alliances with their close ones that will entitle you to shared social security, to shared hospital insurance, to share financial responsibilities with each other, to have the right to choose parenthood if one feels that pull, to be ensured that those you love will have the right to stay around and be close if something awful should happen. But still, there is something in the way that the battles for equality are fought (and sometimes won) that troubles me.

The problem is that it appears as if the only acceptable route to achieve the basic rights above passes through conforming to an old, patriarchal institution by the name of marriage. This institution, as most of you will be familiar with (married or not), has been instrumental to regulate heritage, the notion and definition of ‘legitimate’ descendants, the economy and the division of paid and unpaid work, ‘acceptable’ social behaviour, sexuality, and I am probably omitting a few. Oh yes, the marriage institution has been particularly important to restrict and/or deny women equal rights with men, and can include only two people, supposedly having a sexual relationship. And it is this traditionalist notion of marriage that LGBTs who wishes to access to some basic rights also have to conform to.

Reading some of the message boards where gays and lesbians seek to get to know each other for a parental project together leaves you with the chills of conventionality and heteronormativity. A homo version of Jelinek ? ‘Stable, monogamous man, with university education, white-collar job, and excellent economy (possibly some details here) seeks serious parental project with like-minded lesbian couple.’ Oftentimes there is also information about ethnicity and physical appearance.

I was once asked by a journalist why I thought lesbians and gays should be able to adopt and have children ? Although I had doubts that she would understand, it felt important to try to make my case. Either LGBTs should get the same rights to become parents, because “we are just like YOU” (read we share your heternormative values, your family ideals, etc) – even if that uniform ‘you’ is totally imaginary, since luckily there are all kinds of diversity and deviation among heteros as well. But although this ‘you’ does not exist it is arguments of sameness and of assimilation that have been the key in struggles where homos have finally been entitled some legal rights in terms of parenthood (very few countries by the way). In my talk with the journalist I tried to argue that we should have the possibility to be parents precisely because we are not like ‘YOU’. Since the traditional nuclear western bourgeois family does not have an impressive track record to show off with in terms of little children’s wellbeing, why not give other models and a diversity of models a chance ? Generally lesbians and gays have thought quite a lot about how to go about to have children and how they want to see them grow up – as there is no automatic model or way to set about becoming parents for gays and lesbians.

Another possibly worrying aspect of the baby boom, in particular among lesbians, is of a more (feminist) utilitarian kind. Who will ensure continuity and presence in the women’s movement if, like their hetero sisters, also lesbians will spend years and years changing diapers, organising children’s birthday parties, oversee homework, etc ? I guess history will tell us...

Being a non-contesting, assimilated into heteropatriarchy gay or lesbian, is so much less threatening than being a feminist - regardless of gender. And even more threatening is of course the lesbian feminist. Maybe because it is just in this intersection that subversive potential takes a leap forward (sometimes) ?

In 2007, an alliance of feminist and lesbians in the Swedish Feminist party (Feminist Initiative – F !), brought forward a proposal to amend the regulation on marriage. Instead of an act that could only include two persons of opposite or same-sex, the feminist party proposed that several persons of whatever sex should be able to ‘marry’, to form a union with the partner(s) of their choice – and that this should not necessarily be linked to the idea of a sexual relationship (although it could be as well). What dynamite. The proposal detonated, and all dinosaurs that had not dared criticise feminism in a long time in Sweden got mobilised – the media and journalists were transformed into stalkers - hitting furiously in all directions where they thought they saw a feminist moving or breathing. The queer feminist Party spokesperson, as well as the whole party, was accused of wanting to introduce polygamy – accusations which also played on fears of the ‘barbaric other’ – someone that women in particular should be afraid of ! This sustained mediatised attack proved quite fatal to the Feminist party, and shattered the chances of making it into the national parliament.

So, although LGBT heteronormativity seems to be on the rise, I do think there is a lot of destabilising potential – particularly among lesbians – where ‘marriage’ is still not an option for many, where parenthood is more a choice than automatism, and where women’s solidarity and activism has a long, inspiring history.