Why on earth would we look into these labels ? Why would we even be part of this naming, categorising, creating of formulas ? 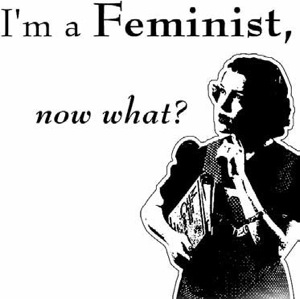 And doesn’t this questioning risk simply being dividing – between feminists, between women ?

And if we go there, there are also other intersections and tensions to explore – class, ethnicity, age .. !

But if we felt like speaking about the links, the crossroads, the intersections, the conflicts, some history, some tensions, some shared struggles, complexities between lesbian and feminist and the two together - it is because it matters to some of us. Sometimes we find ourselves at different places, locations that makes it obvious that being lesbian or hetero matters. As it matters being feminist or not, as it matters being hetero feminist or lesbian feminist – in some contexts, and at some given times. Not too long ago, feminists argued that we should not make lesbians too visible in the feminist movements, because it would scare away women (and men) from the cause. Today, we should not speak about lesbians in feminist movement because (among other things) it risks reinforcing and reproducing binary and inequality generating categories or fixed identities. And blunt, square identity politics is indeed a deadend strategy if identities are not allowed to be moving ones. But at the same time - speaking about identities and their political positions remains relevant…

It seems to be empirically proven that not all feminists are lesbians, and not all lesbians are feminists, but what is the relationship between hetero and lesbian feminists political projects ? History shows that there have been tensions, clashes, but also shared struggles. One can wonder whether heteros would have access to contraception and abortion if it was not for all lesbians active in the movements for liberal family planning ? One could probably safely say that hetero feminists have been far less mobilised for lesbians’ right to adoption, insemination, and lesbian parenthood in general. Although, opening up these practices to the broadest diversity of women possible would be an obvious feminist project ! The history between feminists and lesbians is full of missed political opportunities, we should make sure not to make the same mistakes in the future… ?

We could have just begun from the definition offered by Monique Wittig in 1978. “Lesbians are not women”. Understand it this way : lesbians are those who do not accept the role the patriarchal system has in store for women, a role that has its systemic counterpart, that is The (Hu)Man. We have preferred to start from scratch, with all the denotations, even stereotypes, lexical networks used with the term ‘lesbian’.

This dossier gives space to some views on the way being lesbian or hetero feminist has played a role… and still does. Be it in our professional activities, in our activism, in our understanding of the world, or just …at home in the sofa trying to figure out what the struggle is all about tomorrow. You can read texts, talking from different contexts, saying something about the relationship between women and women – heteros and lesbians. Showing that there is more to play than who-I-sleep-with ! In the end, it is not really a question about how we define ourselves (in what identity category), but what practices, projects, and activities we go about. Which is why gay and lesbians can be supporting heteropatriarchy, and heteros can challenge the same profoundly (ouff, if really set out to do so !)