Part I â€“ The Security Machinery

For the past year I have been living in Baghdad. I have been working as a gender and human rights adviser in an American non-governmental organization.

While the vast majority of ex-patriates working in Baghdad live in “the green zone”, in the heavily fortified 10 km fortress, a few of us non-locals braved life in the “red zone”, which is all of Baghdad outside the imperial fortification. However, the red zone, at least for the internationals living there, was not the Baghdad of the international news. It was not the Baghdad of suicide bombers, IEDs (improvised exploded devices) and tortured bodies found in the early morning dew. 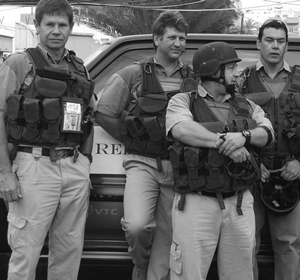 My life in Bagdhad replicated that of the emerald. I lived in a heavily guarded fortress, complete with sniffer dogs, watchtowers, and checkpoints to access the compound which provided a level of comfort 24/7 not afforded by most residents of the city. These compounds of ex-patriate living came complete with restaurants and bars where one could choose between single and double malt scotch.

Even the dangers of the streets of Baghdad were minimized. Every time I leftmy gilded prison it was only in a fleet of armoured cars accompanied by 11 heavily armed bodyguards. There was no mistaking our convoy – 4 SUVs with kalashnikovs dramatically pointed out every window and a largemachine gunmounted out the back car with a sign in Arabic and English warning all : ‘Danger ! Stay back 100 metres or you will be shot’. Iraq is a country awash with private security companies that have blossomed in the chaos of the country postinvasion. It is estimated that around one half of all development dollars being poured into the country (currently in the billions) goes to private security. My organization, a small non-governmental group working to build the capacity of Iraq’s civil society, was no exception.

Approximately forty percent of our 60 million USD budget went to protecting the 15 international staff. Our security company was South African. Other security companies preferred ex-French Foreign Legion soldiers. Still others only hired ex-British Special Forces, or Latin Americans who looked fresh off death squads, or whatevermilitary,militia or special force that had fallen into disuse with the end of the cold war. Most of my bodyguards were ex-military or police who had found themselves redundant in the post-apartheid era. As a human rights worker I decided that it was inmy own best interest not to know toomuch about how they had honed the skills that kept me safe.

I also knew they would not hesitate to put those skills to use if needed. Stories abounded of vehicles being blown up and people injured or killed by security companies – due tomisunderstanding, carelessness or just plain resentment that the streets of Baghdad had been taken over by trigger happymercenaries. Lives were lost and livelihoods destroyed, all with impunity, because the ‘security bubble’ had been encroached – the zone of safety that kept any moving object from intruding too closely to a convoy. I do not blame those who wanted to make us a target of their insurgency. The ‘liberation’ has turned into occupation and the conquerors are none too gentle in exercising their vehicular authority over the vanquished on the streets of the city. 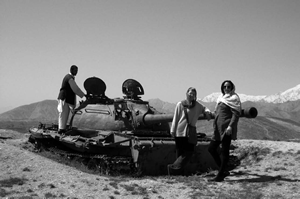 Saturday December 30, 2006, was the start of an important holiday for Muslims – Eid Ul Adha – which celebrates Ibrahim’s (Abraham) willingness to sacrifice his son to God. It was also the day that Saddam Hussein was executed. Although the final appeal in Saddam’s trial had been rendered a few days previously, clearing the way for his execution, no one had seriously expected it to happen before the end of the holidays. However, the current Iraqi leadership, with American acquiescence, was anxious to put the whole Saddam sideshow to rest and thus he was executed at 6 a.m. before the official start of the holiday at noon.

I had spent the night in the green zone and by the time my bodyguards and I pulled into the parking lot of the dining facility of one of the many American military bases that dot the green zone for breakfast at 7 a.m., the din in the mess hall overwhelmed the bank of TVs that decorated the huge dining room, all blaring with CNN’s and FOX’s coverage of the execution. The mess filled with cheers and backslappings as the predominantly American and male customers congratulated each other over the demise of America’s public enemy number 1. This was to be expected : A significant percentage of Americans still think that Saddam was responsible for 9/11.

What surprised me was the reaction from many of my Iraqi Shi’a colleagues. While they initially felt that justice had been served, on closer scrutiny, it turned out that there was a collective nostalgia for the Saddam era when the restaurants were full and no one was afraid of going to the market. By and large Iraqis feel that a strong authoritarian hand is needed if Iraq is to find its way out of its current morass and survive as a unitary country which is whymany Iraqis are viewing the days of Saddam through sepia tones.

In the intermediate aftermath of his execution it didn’t take long for the jokes to go around : “Got some Saddam Hussein t-shirts for sale. A bit tight around the neck, but they hang well !”. “Saddamsays he can’tmake it to your new year’s party. He’s hung over from last night.” My colleagues eagerly exchanged videos of the execution they had downloaded on their cellphones. But after the 3-day nation-wide curfew had been lifted and the parked cars began to explode once again,many Iraqis, Shi’a, Sunni, non-Muslim, put on their rose-tinted glasses and went back to the business of longing for a safer, more innocent past.

One of the saddest by-products of the occupation has been the roll-back of women’s rights in the country. While the impact of sanctions in the 1990’s brought about a gradual slide towards the ‘fundamentalization’ of society, the new emperors turned the slide into an avalanche.

Because of the economic hardships wrought by the sanctions, women began to disappear fromIraqi public life. Many families could no longer afford to send their daughters to university and thus fewer women were able to enter into professional employment, illiteracy rates began to rise, especially among females, and girls as young as 14 were being married off as part of an income-generation plan for families.

This in turn contributed to the process of ‘fundamentalization’ and a reliance on discriminatory cultural traditions wrapped in religion which further reduced women’s ability to operate in the public sphere. It was no longer expected that girls should be educated and take up professional employment. Instead, more emphasis began to be placed on women in domestic life. Changes began to appear in women’s dress as well as attitudes and expectations.

By 2003 only a handful of Iraqi women, mostly non- Muslim, were brave enough to venture out without “proper attire”, including the hijab. Many ofmy female colleagues spoke of the pressure to wear the hijab. After the American invasion, in a kind of Taliban-inspired nightmare, fundamentalists had free reign to roam the streets beating and chastising women for not conforming to “Islamic” standards of behaviour, including dress.

But most tragic of all however, has been the dismantling of the legal framework protecting Iraqi’s women’s economic, cultural and particularly, social rights since the new emperors took control of the palace. In a country that was formerly one of the most progressive in the Arab world with regard to women’s rights and which had one of the highest number of educated, professional women, with a few strokes of a pen, more 50 years of rights have been summarily wiped out.

In particular, Article 41 in the new Constitution, are now free to interpret personal status according to individual “religions, sects, beliefs, or choices”. While sounding benign on paper what in it effect means is that women’s rights with regard to marriage, divorce, property and other familymatters are now in the hands of tribal, religious and other community leaders (all men) who are free to determine the status of women according to their own beliefs and interpretations. The one sentence article overrides a 1959 law which gave all Iraqi women the same rights on the basis of statutory law. To paraphrase George Orwell from his book, “Animal Farm”, all women in Iraq are now equal, but some aremore equal than others and none are as equal as men.

Although Iraqi women have been actively advocating for the reformor repeal of Article 41 their advocacy has for themost part fallen on deaf ears, including with the international community, to whomwomen have turned to assist them in achieving justice, claiming involvement in the issue would amount to cultural interference in an internal Iraqi matter. However, they have not hesitated to comment on and become involved in issues that intersected with their interests, including the oil law, the “de-Ba’athification” process, and the NGO law.

Aided and abetted by the international community, the ‘fundamentalization’ process of Iraq is now complete, leaving women little better than unwelcome visitors in their own land.