Us : Feminists face the power of Religion

Outwardly the USA is a secular state while in reality it is a haven for fundamentalist power groups which have more in common with their alleged Muslim extremist opponents than they have differences. And both exclude women both from power and influence, including the right to control their bodies, choose their sexual practices, and define their spirituality.

North American feminism has prided itself on its use of reason, its arguments based on logic and history to demand equal rights for women and the laws and arrangements to make that possible. At the same time, most feminists have insisted on a sharp distinction between spirituality, including the reclaiming of women’s belief systems inside and outside established sects, and religion which involves established organizations, hierarchies, and mandated practices. In so doing, feminists in the 90s have underestimated both the political power that is organized religion, and the influence that fundamentalism has achieved in the political sphere. 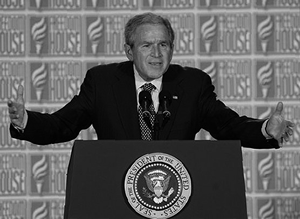 Lacking an established church, the US has seen the growth of self-referential, self-proclaimed “churches” headed by those who stress faith and rigid adherence to the words of their particular bible, regardless of its provenance or translation over the centuries. In almost all these sects, women are seen as both the source of evil and a group to be controlled in every way. While debate in Europe may take place between those who are familiar with history and theology stretching back centuries, arguments in the US are conducted merely by the exchange of quotations from religious texts or writings purported to be by those who have had intimate conversations with the lord. George W. Bush is not the first or only politician who has claimed personal guidance from above which absolves him of responsibility for his illegal and immoral policy decisions as president.

In the US, unlike Europe, atheism and secular humanism are minority views seldom articulated in public. No American politician can expect to raise money or be elected if she or he fails to declare a belief in a higher power. While the Constitution affirms a strong divide between church and state, popular discourse and media reportage take for granted that to be ’godless’ is to be immoral, sinful, unreliable, dishonest, and dangerous. Feminists who wish to change the power structure or theology of recognized religions, and feminists who are spiritual in unusual ways are condemned not only by their opponents, in the case of abortion and gay rights, but by the public at large. Logic and reason play no role in these debates, nor do references to church and secular history, law or even established theology. And public debate leading to legislative and judicial activity is far less significant than the private influence of religious individuals and groups.