Changing ’family’ models are not a threat, they are reality

Before Spain passed a law that gives homosexual couples the right to get married and to adopt children, the Catholic Church was able to mobilise hundreds of thousands to march against the law. In Brussels, the Catholic conservatives and various rightwing forces only managed to bring a few thousand people to the street to march against adoption rights for homosexual couples in September.

Well, at least that is what the marchers say they are protesting against. In reality, I think they are marching against gays, lesbians, trans people, feminists, queer activists, and you name it. If they could make it illegal to get a divorce or reintroduce adultery as a criminal offence they most probably would ! It is just the same old patriarchal conservatism. Revolting as always. With slogans such as, "Open your eyes, wake up - the family is under threat !" the Belgian organisers of the anti-homo march on 10 September made efforts to appear ‘polite’ and to avoid any overt aggressiveness in slogans. However, the self-righteousness smeared on the face of the marchers could not conceal their hatred and aggression only held back with difficulty. Most of the people marching were traditional Catholic bourgeoisie dressed in khakis, kept on the right track by the participation of their spiritual patriarchs (priests). There were also some Vlaams Belang supporters (Flemish extreme right nationalists/ fascists) with shaved heads stamping around and the Belgian Christian Motor Bikers (“Jesus is my guardian angel”) were there to ensure that all these fundamentalists kept calm. Among the party political signatories to the call of the march were individuals from MR (liberals), CdH, and other conservative parties. 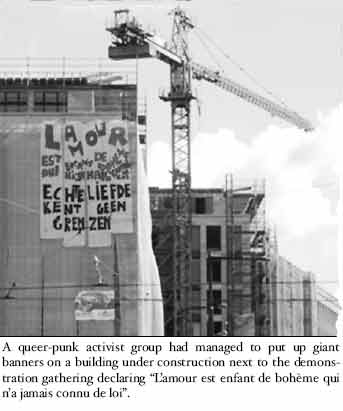 One week later there was another demonstration in Brussels against allowing homosexuals to adopt, this time calling itself ‘European’. As a mascot, the organisers used the Virgin Mary herself, which seems a bit contradictory to what one might think since she herself had a child without a father. On this occasion, no effort was made to appear polite or avoid hate speech. The participants were invited to pour their hearts out expressing their various phobias. A minor infantry of skinheads dominated the scene, affirming the openly hostile character of the demonstration. There were only between three and four hundred people at this anti-homo demonstration. Because of the hate-speech like tendencies of the groups involved in this demonstration, the leaders of more ‘moderate’ fundamentalist groups called on their followers not to join it. ‘Good’ bourgeois Christians just don’t go so low as to express what they actually feel - fear and disgust ?!

A colourful and cheerful counter-demonstration of about 100 people drew together lesbian feminists, gay activists groups, feminists from family planning associations, the anti-fascist front, the Flemish young socialists, etc. – singing, whistling, and chanting slogans until the demonstrators, escorted by about 50 police officers, drooped away to begin their march. In any case, the battle of conservative patriarchs and their disciples is a lost one. They are hopelessly marginalised and bypassed. Rather than being the norm, their monolithic, indivisible, heterosexual ‘family’ is becoming a rare and self-decomposing exception. Numerous new ‘families’ and ‘non-families’ are already a reality and fighting for the rights of gay, lesbians, and queers has become an integrated, key element of the human rights agenda. So…the threat is over. Most welcome to reality.