Knitting, sewing, cross-stitch, crochet : crafts like these probably bring to mind grannies in rocking chairs making clothes for their grandchildren. They are linked to the traditional domestic life that women led up until a few decades ago : locked inside their homes, supplying their families with handmade jumpers, scarves and socks and decorating the house with quilts and embroideries... But since a few years, craft started to become popular again, especially in the USA and the UK. Old and young, women and men were reinventing, reclaiming and renewing old craft techniques. Arty craft books were published, craft shops flourished, craft fairs were organised, craft blogs started and craft zines written, and people even started to knit in public again. Handmade was hip ! 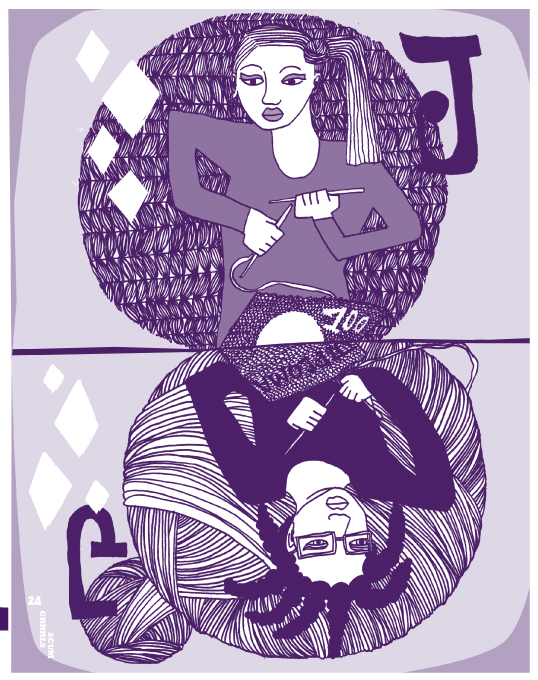 “I started thinking about ways to knit for the greater good, and I realized that right now, right here at this very moment in time, the act of craft is political. In a time of over-ease and overuse and overspending, I can take back the control over where my money goes, over what my outfit is, and over how my life is lived.” Betsy Greer in Handmade Nation [1]

But that was not all : even activists and feminists started to make use of crafts. This was not something new. The suffragettes sewed their own banners to promote their causes and made embroideries to fund their campaigns and organisations. Second wave feminists used sewing skills to make flags or hand-knitted “fem-soc(k)s” [2]. In a documentary I recently saw about the Dutch feminist movement around 1980, it was mentioned that Dutch feminists knitted a lot, even when they were locked up in the police station after being arrested for illegal actions [3]. Today, feminists organise workshops to learn to knit or sew menstrual washable pads.

Feminist craft collectives are started and grrrl zines written that include patterns and how-to DIY instructions. The World of Women March made a gigantic quilt for their campaign and feminist artists use crafts to express their ideas. Even though most of the time crafting is a solitary occupation, which can be a disadvantage because it keeps women indoors, on their own and isolated, crafty women sometimes gather to create together. Crafting collectively in knitting circles or sewing gangs builds bonds between women and such meetings and gatherings can even become similar to consciousness-raising groups when personal-political conversations happen while crafting together with other women.

The concept of doing things yourself (“DIY”) that is used by punks, riot grrrls and anti-capitalists and other activists and artists, is important for the craft movement too. DIY is doing or making things on your own terms, by yourself or together with others, non-commercial, low-budget, autonomous. It’s the idea that you can do or make anything you want. You CAN paint, you CAN make a film, you CAN write articles or stories. You don’t need a degree or be a professional to be able to do something. This concept is very powerful and inspiring, especially for women who are often discouraged from doing anything (except the dishes). In practice, DIY can mean recording and releasing your own records, writing your own (maga)zines, growing your own vegetables, building your own house... but also making our own clothes, bags, pillows cases, washable menstrual pads, etc. DIY contributes to a sustainable lifestyle : instead of consuming, we are creating. By not buying, by consuming less, you boycott and help to disrupt the capitalist system even at times when we seem so dependent on it.

But even though crafting can mean consuming less, it can also lead to consuming more ! Because you’ll need equipment such as knitting needles and crochet hooks, yarn, fabric, buttons, a sewing machine, special scissors, craft books, patterns, etc. Handmade craft is also a market of its own. Finished craft creations are sold and bought on art markets and craft fairs or online on websites like etsy.com. It can leave the impression that it’s just another business, especially when even inspiring knit graffiti action groups like Knitta Please get trademarks on the word “knitta”. Still, craft creations aren’t only for sale, they can also be swapped or given away for free. Such a self-made gift economy sounds like a great economic utopia to me ! (Unless women are doing all the voluntary work, while men get the free presents).

Reclaiming typically feminine occupations or patriarchal identities and calling them feminist can sometimes be problematic (for example with “feminist” burlesque/striptease). It’s not because women or self-identified feminists do something that it’s automatically something “feminist”. That’s why we have to look critically at the craft movement to see what we can use and what we should be wary of.

In her essay in the book Handmade Nation, Betsy Greer describes her activism as creating her own clothes in a style not dictated by the fashion industry, buying ethically produced products and knitting for charity causes (donating her self-created hats, scarves and blankets). However well-intended, this kind of activism hardly harms the status quo, let alone really radically changes the way our society works. It also fits perfectly in the restricted roles that women traditionally occupy : shopping and charity. It’s a problem similar to other social movements today : change your lifestyle to change the world (for example in the ecological movement : reduce your car-use and buy low-energy light bulbs, but don’t attack the industry and politics that really cause environmental destruction).

Sometimes craftivism (craft + activism) is about creating positive environments, making people smile because of the beautiful little creations in public spaces . For example knit graffiti groups such as Knitta Please “dress” trees and street signs with knitted wraps which they call “tags”, referring to graffiti tags. This can be fun and add some colour to grey cities, but unfortunately smiles and fashion statements alone will not overthrow patriarchy and capitalism. To achieve radical change, craftivism needs to go beyond the “good girl” image and kick some ass !

“What we are underutilising is the potential for crafts to express our rage at the stupidity of the world, demonstrate our vision for how to do things better and at the same time honour our mothers, grandmothers and great-great-great grandmothers. Women (and men) are rarely getting together to create community based craft projects designed to express a creative vision for a better world.” Radical Cross Stitch DIY : http://radicalcrossstitch.com/xstitch/

Fortunately there are examples of more radical and critical craftivism. In Brussels the collective Tricot Trottoir, invented by the artist Toos Van Liere, started with the idea of the knitted “tags” invented by Knitta, but went a bit further. Each time Tricot Trottoir chooses a social, environmental or political theme and then they install collective “illegal” public art made by knitting ripped up plastic bags to criticise plastic waste. They even knit plastic balaclavas to mask themselves during the actions ! With their craft actions, they criticise for example the colonialism of the Leopold II regime by knitting lots of “hands” which were placed around a statue of the former Belgian king to refer to the brutal punishments and mistreatment of the people of Congo by Belgian colonialists. Sadly, this artwork was soon removed by the authorities.

Another example is the feminist craft collective Radical Cross Stitch from Australia. They make cross stitch embroideries that say “riots not diets” and “fuck patriarchy” and create street-art such as gigantic fence cross-stitched slogans to criticise unused vacant land. On their website you can learn how to embroider a portrait of Emma Goldman or find free patterns of feminist slogans and logos. Radical Cross Stitch also publishes a craft zine called “Hoopla” that includes patterns, action reports and information about the herstory of feminist craft activism and political art.

Some other examples of craft activism that I’ve heard of include knit-ins (like sit-ins and teach-ins), making huge puppets for demonstrations, the Knit A River campaign (a gigantic blue “scarf” that represents water to address clean water shortage), embroidering radical graffiti paintings and pasting them on walls, etc. There are also feminist artists like Allyson Mitchell who’ve knitted little houses or caves (which she calls a “vagina dentata”). Or Ghada Amer who embroidered pornographic images of women while explaining her work as “I am participating here in the double submission of the woman, i.e. the woman sewing and the woman sewing her own distorted image” [4]. There are a lot of creative possibilities ! We could even learn self-defence with knitting needles. :-)

Craft, it can be useful and fun in many ways. You can use it as in artwork, as a hobby, as a way to reduce consuming or in creative actions. But in my opinion the craft movement is also a bit overrated. It has potentiality and even though craft techniques can be and are being used for activist purposes with great result, there are some problems as well. 1) Traditional conservative roles of women are idealised and promoted, also within “alternative” or anti-capitalist communities, 2) it can be an isolated individual activity mostly targeted at women and 3) consumerism is hidden but not wiped away. Back to the house and back to the shops ?

So what shall we do with all the crochet & other craft stuff ? Throw it overboard as another patriarchal occupation to keep women quiet or can it be emancipatory, activist, rebellious and even feminist ? In my opinion, it depends on what we do with it. The revolution won’t be knitted, but learning crafts can be useful in creative activism. And I still think it’s fun to promote feminism by sewing a cool feminist patch on my jacket or bag !